This property being offered for sale is located in Unity Township in Westmoreland County, Pennsylvania.The site is strategically situated on U.S. Route 30 between the cities of Latrobe and Greensburg and is one of the few remaining large undeveloped properties on this segment of the highly traveled highway. This portion of Westmoreland County, part of the Laurel Highlands, is transversed East/West by U.S. Route 22 and 30 and North/South by Routes 981, 982, and 711. Access to the Pennsylvania Turnpike is 12 miles south at Donegal and 14 miles southwest at New Stanton. 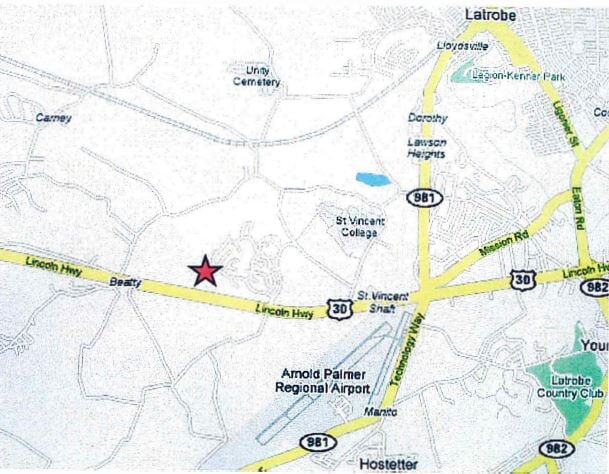 The above picture is localized area of the property with the red star showing the approximate location. Note that Latrobe is to the northeast and the Arnold Palmer Regional Airport to the east. Penn Dot traffic count through this corridor on Route 30 is an average of 33,000 vehicles per day. 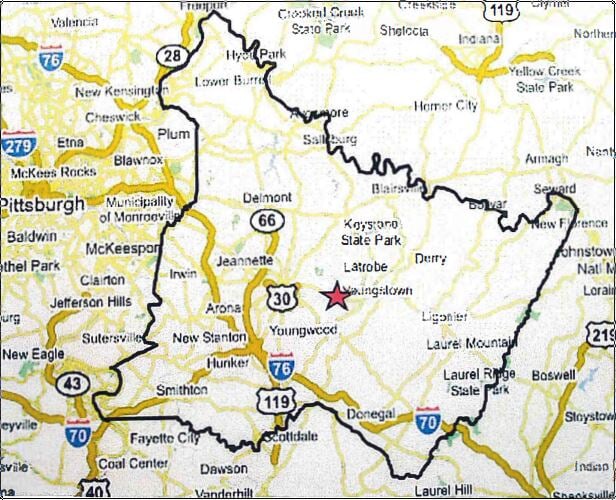 The above map shows Westmoreland County outlined in black with the red star showing the approximate location of the land.

The property consists of 81.243 acres of farm land with 2443 feet of frontage on U.S. Route 30. 46.302 acres is zoned “business” (B-1 and B-2 zones) and the remainder of the land, 39.941 acres is zoned “residential” (R-1 zone). The map below shows zoning lines and the aerial photo shows approximate boundary lines. The photo view is looking northeast towards Latrobe. 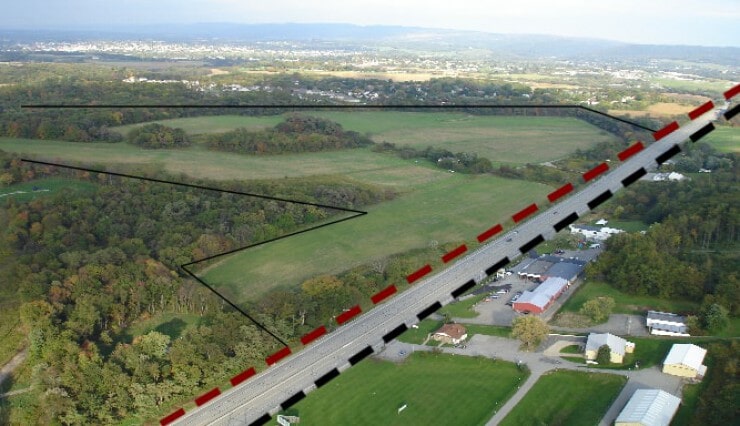 = Water Line
Black = Sewage Line
Located on the property is a 1800's era, two story brick home. It is in a high state of disrepair and more than likely be removed depending on development plans. The photo to the left shows the home. This property has public water that transverses the property and a sewage line is on and along the south side of Rt. 30. Natural gas lines are near by with 3 active wells on the property. Gas from these wells will be available at a reduced rate. The photo on the right shows a picture of one of those wells. 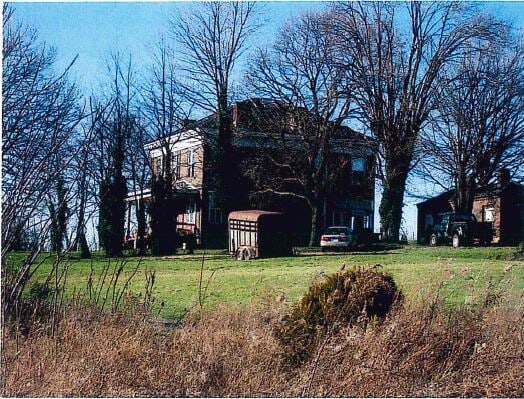 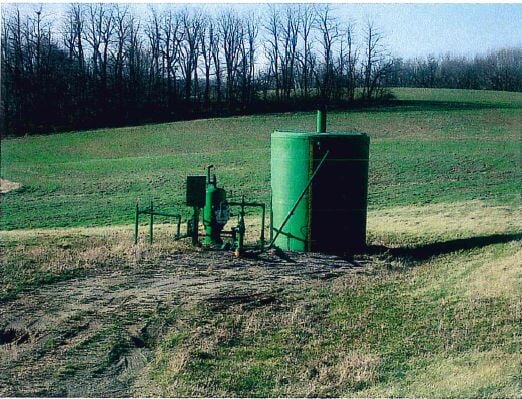 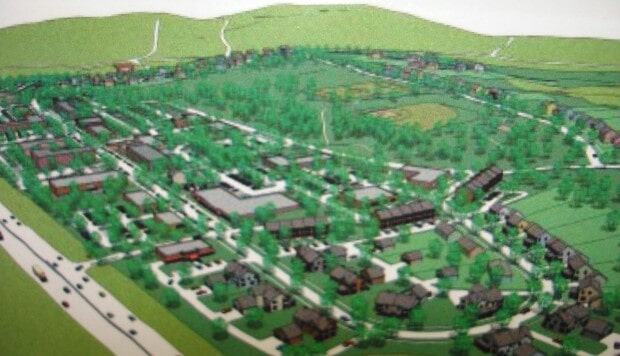 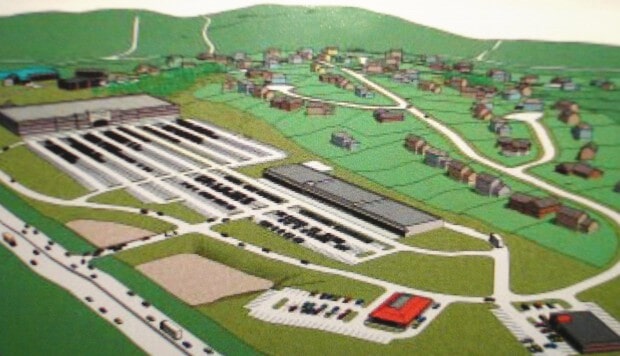 Even though the current census shows a small decline in the population to the year 2021, compare that with the Demo Report created in the year 2006 population of 33,225 in a 5 mile radius with the 2017 population of 41,354 in that same radius. This property is located in a highly desirable location and in a key position for any future growth that will be coming.

The current gas royalties are derived from shallow wells with small dollar payouts at current production and gas prices. The future potential is when drilling is done on the Marcellus and Utica gas formations. 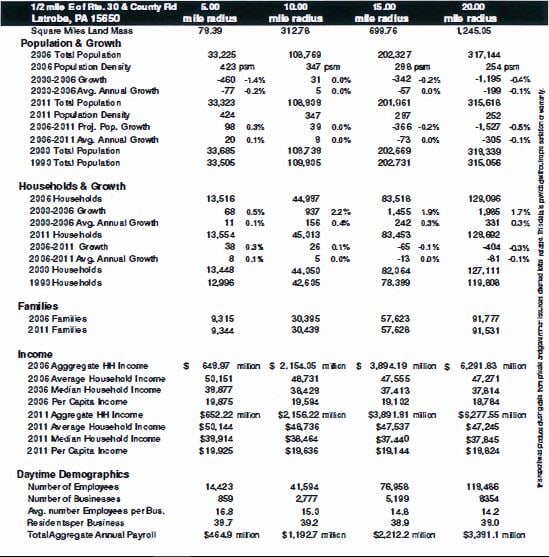 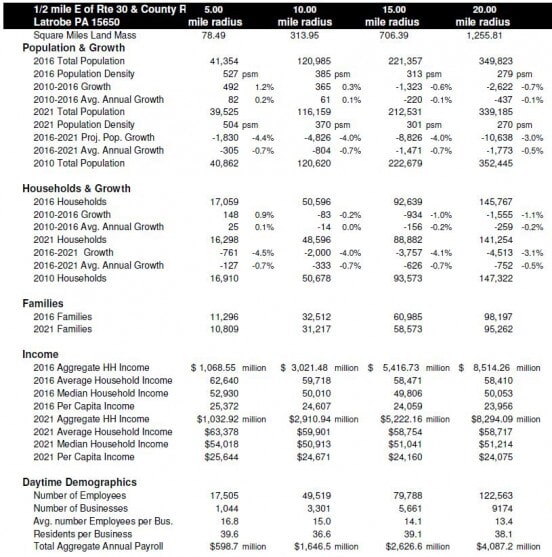 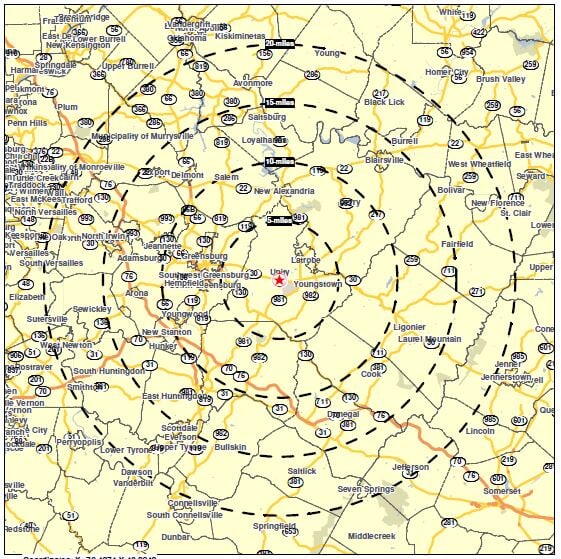 The asking price is based on a negotiated option agreement between the current owners and a Pittsburgh based land development company in the year 2006. The agreement ended when one of the primary tenants pulled out from the development company do to the economic outlook at that time. The sewage on the south side was still only in the planning stages in 2006. The property was taken off the market at that time.